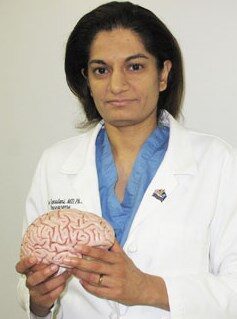 The association between abnormal eye movements and brain injury has been known for so long that it is described in the 3500 year old Edwin Smith papyrus. Advances in eye tracking technology over the last 30 years enable precise tracking of pupil position while a person watches television. Dr. Samadani’s laboratory has developed a way to use eye tracking while a subject watches television or a video to calculate how well the eyes move together in unison. She was the lead investigator on a study that enrolled patients who had undergone CT scanning of the brain for suspected brain injury and eye tracked them as they watched a music video or cartoon. Results were compared to normal healthy control subjects who had not had trauma, and a second group of negative controls that had sustained trauma to their bodies or limbs but did not meet emergency room criteria for obtaining a CT scan of the brain. All of the trauma patients also underwent testing with the concussion outcome measure SCAT3 which assesses severity of symptoms, cognitive function (thinking), memory, and balance.